Imagine walking down a public street on your way to dinner with your family, now imagine police knowing exactly who you are and the names and ages of every family member.

But wait it gets worse, because the surveillance doesn’t stop there.

Once you have entered the restaurant, police can use Project Green Light, Project Nola or any other police cam-share program to spy on you while you are eating.

The above video warns everyone that police smartphones could store up to one million faces and their laptops could have access to 50 million faces. (To find out more about police facial recognition smartphones click here.)

At what point do Americans begin questioning why police need access to one million, 50 million or a BILLION faces? 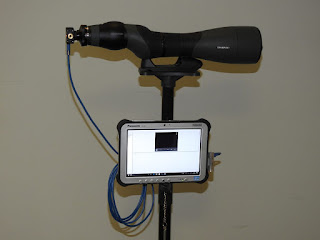 Police will now be able to identify crowds of people in real-time using various methods.
“Distances range up to hundreds of meters away from the target(s). Our capability satisfies a wide variety of use cases, including but not limited to dismounted/tripod-mounted operations, force protection via towers or airborne assets, and crowd scanning, which allows for automated tracking and extraction of faces, as well as real-time alerting to Watchlist hits.”

If you had any doubts that facial recognition is all about creating secret ‘watch lists’ then why does Secure Planet mention it FOUR times?

Did you also notice that TacID is designed to be used in existing cameras and surveillance equipment? Which means the public will have no way of knowing which surveillance cameras are using TacID.

Police aren’t the only ones using secret watch lists.

Last week, I warned everyone that the MLB, NHL, NBA, NFL and MLS have all begun using TSA Precheck biometric scanners.

Will sports teams use facial recognition cameras to create their own secret watch lists?

Last year, TSN wrote a story about the NHL looking into facial recognition software. They interviewed Face First CEO Peter Trepp who boasted about being in touch with numerous stadium owners and sports teams encouraging them to create their own secret watch lists.

“At the very least, Trepp said, NHL teams could follow FC Groningen’s lead and create their own database of troublemakers and banned spectators. Teams could also use facial biometrics to identify VIPs and season-ticket holders and fast-track their entry, he said.” (Click here to find out how the NHL could use secret watch lists to spy on fans.)

To answer the question about why police need access to one billion faces?

All you need to do is go to Face First’s website and read their mission: “Creating a safer and more personalized planet through facial recognition technology.”  And there is your answer, companies and governments are slowly creating a planet-wide facial recognition database.

Turning CCTV cameras into secret facial recognition cameras is not turning earth into a ‘Secure Planet’ it is turning the planet it into a giant surveillance experiment.

Rental cars to use facial recognition to spy on your vacation

4 Privacies You Didn’t Know You Lost